The event took place at the Aqua Turf  Club in Plantsville, CT.   Bruce Richardson, Trevor Hill and Christian Briggs of TDEG were there to accept the award.  Also present were Erik Kaeyer and Joe Reilly, of KGD Architects, both of whom were architects for this project.  Pictured below are Bruce, Chris and Trevor with Rob Yirigian, ACEC-CT President. 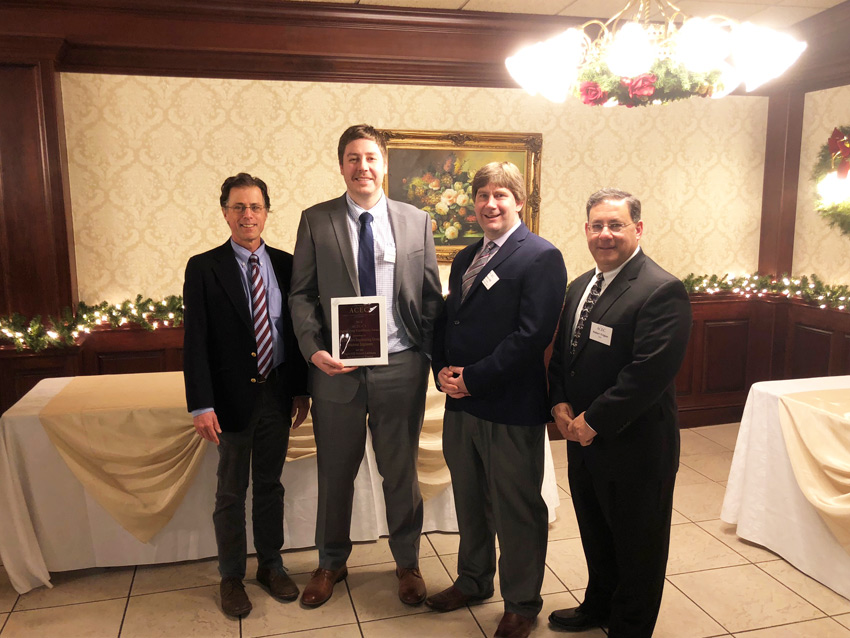 Jason Henion, Senior Project Engineer, recently passed the Connecticut State Licensing Examination and is now a Professional Engineer (PE) in the State of Connecticut.  Jason is presently working on the Warren G. Harding High School in Bridgeport and the Two Roads Brewery in Stratford, among other projects.   He has been with TDEG since June 2014.

Ryan B. Walsh has been promoted to Project Manager.  His new role assigns him with the responsibility for the planning and delivery of structural engineering services for educational, commercial and residential projects including additions to St. Thomas More in Darien and ASML in Wilton.  Ryan has been with the firm since September 2015.

Tianming Ma, EIT, has been promoted to Project Engineer.   Tim has been with the firm since 2016 and has participated in the structural engineering and design of many projects including additions to Putnam Hospital Center in Carmel, NY, White Plains Hospital in White Plains, NY and St. Andrews Church in Southbury.

Please join us in congratulating these employees and their accomplishments!

The Di Salvo Engineering Group submitted the Eagle Hill School project into the 2018 ACEC-CT Engineering Excellence Awards.   Chris Briggs, the engineer for this project, made a presentation to the judges on Tuesday, December 5.  We are proud to announce that the submission has been selected as a winner of an Engineering Excellence Award.  This award will be formally presented at an Awards Dinner on January 22, 2018.  Congratulations are in order also to KGD Architects of Mt. Kisco, the architect on this project.  Eagle Hill School in Greenwich focuses on children with language-based learning disabilities.   The project was in two phases.  Phase 1 included a new Community Room and structural renovations to an adjoining classroom building.   Phase 2 included structural engineering services for the Hardwick House, which houses over 250 students.   Check out pictures to come from the Awards Dinner in January!!

TDEG is honored to have been involved in three projects that were recognized by AIA Westchester Hudson Valley on Wednesday, October 11, 2017.  Pound Ridge Pool House in Pound Ridge, NY was awarded the High Honor Award in the Residential Category.  The architect is Taylor-Viazzo Architects of New Rochelle, NY.   TDEG also partnered with KG&D Architects, Mt. Kisco, NY, for the Eagle Hill School Community Room (Greenwich, CT) project.  This project won the Honor Award in the Institutional Category.   Thirdly, a project with Gallin Beeler Design Studio (Pleasantville, NY), the Hudson River Healthcare facility in Peekskill, NY, was given the Citation Award in the Institutional Category.   Congratulations to all the recipients!

Megan Brady, a 2017 graduate of Ridgefield High School, is this year’s winner of the Richard S. Di Salvo Memorial Scholarship.  This scholarship is awarded annually to a graduating senior at Ridgefield High School who will be going on to study Engineering.  Megan was presented the scholarship at Senior Awards Night on Thursday, May 25.   She will be attending the University of Michigan.  Her proud parents are Kristie and Ken Brady of Ridgefield.  Congratulations Megan!

Employees at TDEG again raised money for The American Heart Association.  The Spring “Heart Walk” was on Saturday, April 22.  The day was a wet one, but Eileen Sala, Susan Brouillette and Ken Jones, with Ken’s daughter Maggie, attended the walk around Sherwood Island in Westport.  All together TDEG raised $2,300  for the Fall & Spring American Heart Association fundraisers! 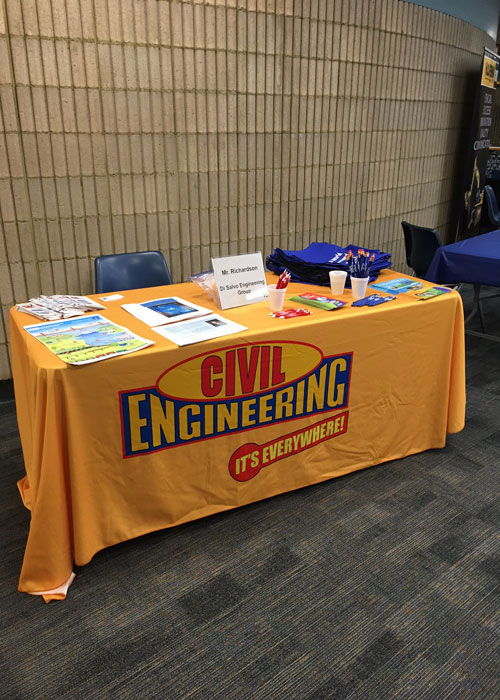 The Di Salvo Engineering Group is honored to be receiving a Merit Award for the 2017 ACEC/CT Engineering Excellence Award competition.  The project entered was The Prospector in Ridgefield, a state-of-the-art movie theater with a deep connection to the community.  The Prospector provides vocational training in meaningful employment for adults with disabilities.   The building replaced a movie house that was built in 1939.   The architect for this award-winning project was Doyle Coffin Architecture of Ridgefield, CT.  See the group picture at the Awards Dinner on our “Did You See This?” tab.

TDEG is proud to have been partnered with Voith & Mactavish Architects, LLP, Philadelphia, PA for the building of a new girls’ dormitory at Millbrook School.  Millbrook is an independent co-ed high school in Millbrook, NY.  The building was completed in 2014 to help house the growing student population.  The project was featured in Traditional Building magazine and can be seen here:  http://www.traditionalbuilding.com/new-dorm-millbrook/